The Super Charger And The Turbo Charger 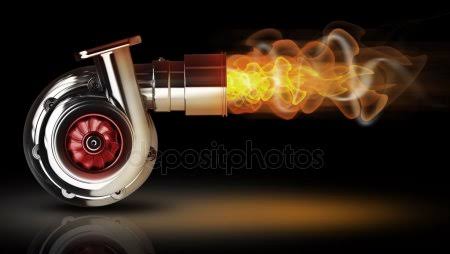 Have you ever wondered, that how can one increase the power of an engine? Is there any device or mechanism which can boost up the power of the engine without even increasing it’s mass ? Super chargers and Turbo Chargers can help us in doing so. These are two different devices doing the same job using the same principle.  When fitted to a CI engine, they can help it generate more horsepower without affecting the power out put per unit mass.

Both these devices work on the similar principle. To draw more power we need to burn more fuel. And to burn more fuel we need more Oxygen. This is very similar to the respiratory function of human body. When we do work we need more Oxygen and hence we breathe faster . The naturally aspirated engine engines can not suck huge amount of air, necessary for power boom. So, in order to increase the amount of air supply we need to put a unit which can forcibly throw air inside the intake manifold. This can be done by using compressors on the intake manifold. The compressor would compress the incoming air and supply the air forcibly to the engine. This type of systems are called forced air induction systems. The turbochargers and super chargers are two forced induction systems working on the similar principle with a slight variation. Let’s study them one by one.
Super Chargers 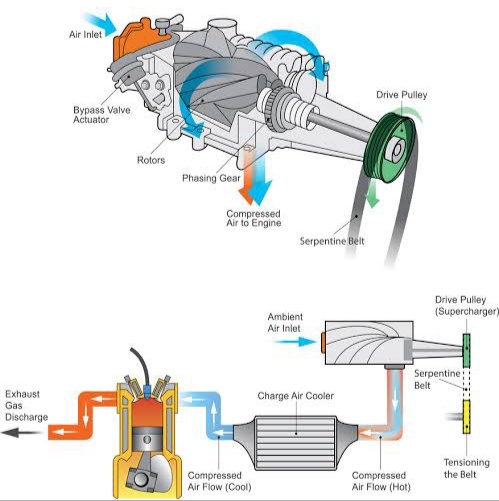 Super chargers are centrifugal compressors which are fitted the intake manifold of the engines. They draw the power from the crankshaft through a belt and pulley arrangement. It means, they are operated by a belt fitted on the crankshaft. When the air coming from the air filters passes through the supercharger, it get compressed. Due to the compression the air gets denser and hotter. To decrease it’s temperature, it is supplied to an intercooler. The cooling further increases the density off the air. Now,  this compressed and cooled air is supplied to the engine. The compression and the cooling reduces the volume of the air considerably. This causes more amount of air to be filled in the engine cylinder per stroke. Due to more air supply, more fuel can be burnt and hence more power can be drawn from from the engine.
Turbo Chargers 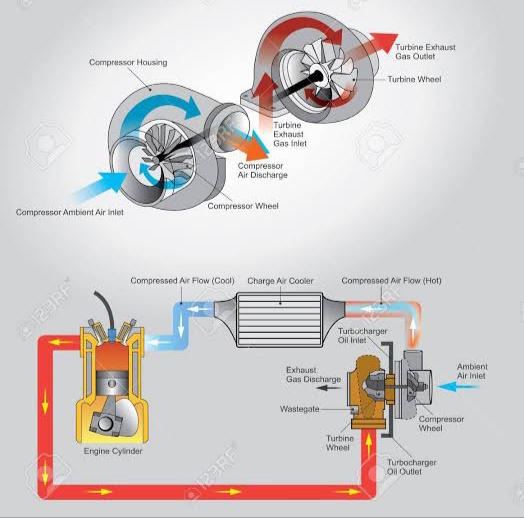 Turbo chargers are also centrifugal compressors fitted at the intake manifold. The key difference between the super chargers and the turbo chargers is that, the turbochargers draw their power from a turbine fitted at the exhaust manifold. The exhaust gases coming out from the the engine are at very high temperature and pressure. These gases have very high amount of energy and hence have capacity to do work. Turbo chargers utilize this energy to rotate a turbine which further runs the centrifugal compressor at the intake manifold. As the compressor starts working, it compresses the air coming through the air filter and reduces it’s volume. This compressed air is than supplied to the intercooler to reduce its temperature and make it denser. The compressed and cooled air has very high density. This causes more amount of air to be supplied to the engine cylinder per stroke. So that more amount of fuel can be burnt and hence more power can be generated. The turbocharged engine may produces a power which is almost 1.5 times a normal engine.
Difference Between A Turbo Charger And A Super Charger
So far we have talked about the working and the construction of these devices. Both these devices are similar to a large extent,. The minor differences in their construction affects the performance of the engine considerably. So let’s discuss the differences between a turbocharger and a super charger.
The key difference between them is that the super charger draws its energy from the engine itself. It is run by the engine crank shaft through a belt and pulley arrangement. While a Turbocharger is run by the energy of exhaust gases, which otherwise was going to be wasted. Since the super chargers draw the energy from the engine, the net power output of the engine gets reduced a bit .
The response of the turbochargers is slow as compared to the superchargers. The supercharges response as soon as we start the engine, white the turbochargers take a while to boost up the power. The turbocharger draw it’s energy from the turbine which is operated by the exhaust gases. At the time of starting the pressure and temperature of the exhaust gases are not sufficient to operate the turbine of turbocharger. Hence it’s compressor can not work properly. It take some time to built up there pressure and temperature of the exhaust gases to the sufficient level . Hence the turbochargers take little time to response.
Now we can conclude that at the time of starting when the rpm of engine is low and the the exhaust gases do not have sufficient temp. and pressure, the superchargers work better. But when the vehicle starts cruising and the temperature and the pressure of the exhaust gases reaches a sufficient level, the turbochargers perform better. To utilize the benefits of the both Twin chargers has been introduced now. 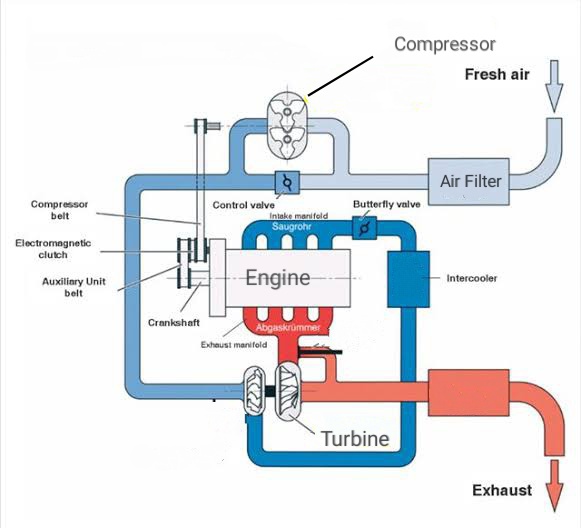 Friends, this was all about the superchargers and the turbochargers. I hope you liked it. Please share your valuable feedback in comment section.