Most of you would be unaware of the EVAP system. Evap stands for ” Evaporative Emission Control System”. The BS4 emission norms made it mandatory for vehicles to use EVAP systems. For this, the vehicles had to be installed with charcoal canisters. Earlier the fuel tanks of vehicles were with small holes to prevent the formation of a vacuum. inside the fuel tank. When the fuel was supplied to the carburetor, the air used to rush inside to cover the space and hence the vacuum formation was prevented. The fuel vapour formed inside the tank used to escape to the atmosphere through the same holes.

What Is Evaporative Emission?

The fuel used in vehicles is very volatile. It uses to form vapour even at normal temperature. These vapours than escape from the fuel tank through the ventilation hole and get mixed with air in the environment. They are very harmful to the environment and are a major contributor to vehicle pollution.

The Evaporative emission control system is very simple in design and construction. It has only two main parts which are connected to each other through several pipes. The main components of an EVAP system are:
1.Charcoal Canister
2. Purge Control Valve 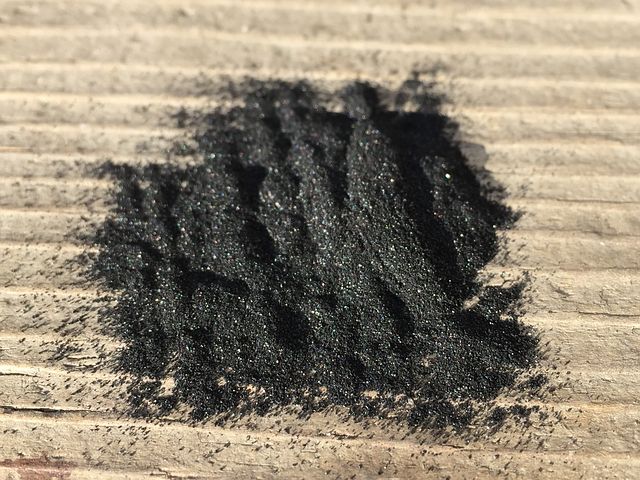 The charcoal canister is a cylindrical box containing activated charcoal inside it. It may have 3-4 ports depending upon the requirements. The charcoal inside the canister is in powdered form. The powdering of charcoal increases its surface area and helps in adsorption of more amount of fuel particles. The canister port which receives the fuel vapour from fuel tank and carburator are called vent ports. The port connected to the intake manifold is called the purge port. It also has a port for air intake called breather port. Just beside the breather port, it has a filter layer made of glass wool. This layer helps in the filtration of air entering inside the system.

These valves are completely mechanical and are operated by the vacuum inside the engine e intake. These are generally used in carburated engines.

These are solenoid-operated valves and are controlled by the Engine Control Module. The ECM operates this valve by sending voltage pulses. This valve remains closed at idle and opens based on throttle operation. The purging is allowed only when the engine becomes little warmer and the supply of the fumes from canister can not disturb the combustion inside the engine. When the valve is completely closed it is called 100% duty cycle, while when it is completely open it is called 0% duty cycle. The flow through the valve is regularly monitored by the ECM. In case of any abnormality or malfunctioning, the Engine Check light starts glowing. This can be diagnosed by scanning the trouble code through On-board diagnosis.

How Does Evaporative Emission System Works? 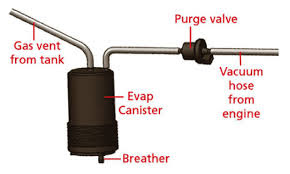 The Evaporative Emission System consists of a charcoal canister. This canister contains activated charcoal. The canister contains 4 pipes. One pipe is connected to fuel tank vent is provided to remove fuel vapours. The pipe is provided with a rollover valve. The function of the rollover valve is to prevent the flow of liquid fuel to canister in case of accidents. The liquid fuel can degrade activated charcoal. The second pipe is called a purge pipe. The purge pipe connects the canister to the carburator or throttle body through a purge valve. The purge valve is a non-return valve, which allows the flow in only one direction i.e. from the canister to the carburetor or throttle body. One more pipe called canister overflow pipe may be provided to remove any liquid fuel present inside the canister. It is also provided with a pipe called breather pipe which helps in air supply. The vacuum inside the engine intake sucks the air through the purge pipe, which ultimately creates suction in the breather pipe. This suction pulls the air through vent pipe. The sucked air moves through charcoal inside the canister. While moving through the canister it carries the particles of fuel trapped in charcoal. This air is sucked inside carburetor or throttle body through the purge pipe. This process is called Purging. This mixture gets mixed with the charge inside the engine and is burnt inside the combustion chamber. In this way, the EVAP system prevents evaporative emissions. It is interesting to know that the carburated vehicle may have evaporative emission control for carburator also. These vehicles loose huge amount of fuel by evaporation through their carburator. Their float chamber is connected to the charcoal canister through a pipe. The fumes generating in the float chamber moves through this pipe to the canister. Here, it is adsorbed in the charcoal particles along with the fueme received from fuel tank. These vehicles have vacuum operated purge control valves which are operared by the vacuum inside the engine intake. This dual evaporative emission control is only for carburated vehicles. The fuel injected vehicles have the evaporative emission control at the fuel tank only. They are fitted with electronic Purge control valves which are controlled by the Engine control module.

How does a horn work?