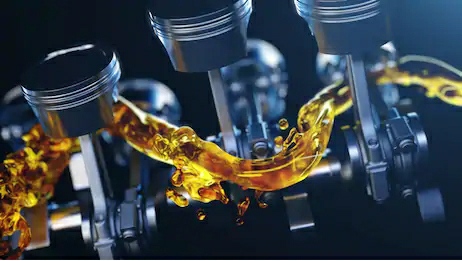 The engine oils consist of a base oil and several several other additives.  The base oil may be mineral oil produced by refining petroleum or it may be synthetic oil produced in laboratories. The base oil generally constitutes  70-95% of of the engine oil. The additives at other hand may constitute 5-30% of the engine oil and are responsible for imparting some essential properties to the engine oil. The most commonly used additives are:
1. Viscosity Modifiers
Helps in maintaining the optimum viscosity at different temperatures.
2. Detergents
Helps in cleaning the sludge and scales formed on the engine components. They also neutralises the acidic compounds formed in the engine oil.
3. Dispersants
They also helps in keeping the engine clean. They help in forming a dispersion or suspension of shoot particles and prevent them from forming agglomerates.
4. Anti Freeze
Prevents the engine oil from freezing and boiling. It decreases the freezing point while increases the boiling point of the engine oil.
5. Oxidation Inhibitors
Engine oils tend to oxidise over the time. This oxidation reduces their lubricating capability.  To prevent them from oxidation the Oxidation Inhibitors are used.
6. Anti  Foaming Agents
The detergents and the continuous flow of engine oil may lead to the formation of foams. These foams may affect the performance of lubricants by increasing their rate of oxidation. Anti Foaming agents control the formation of bubbles by reducing the surface tension of the engine oil.
7. Corrosion Inhibitors
Prevents the corrosion or rusting of the engine compartments
8. Anti Wear Agents
They help in reducing the wear and tear of engine components by forming a layer of oil around them.  They are polar in nature and hence have tendency to stick to the metal surface.

Society of Automotive Engineers (SAE) has developed numerical coding system to grade the engine oils according to their viscosity. SAE viscosity index includes the following numbers: 0, 5, 10, 15, 20, 25, 30, 40, 50 and 60. Lower numbers means lower viscosity and a higher number means a higher viscosity.

Why Do We Need Multi Grade Oils?

During winters or generally at the time of starting, the oil remain cool. At low temperature the viscosity of the oil decreases making it highly viscous. The highly viscous oil do not flow easily. It is also very difficult to pump it, all along the engine. It puts huge load on pump and may also cause oil filters to choked. At the time of starting, the engine oil need to be pumped quickly to all the components. This is not possible with highly viscous oil. Hence, at low temperatures the engine oil need to maintain a lower viscosity.

At higher temperatures the viscosity of the oil decreases and it becomes thinner. If the the viscosity drops below the optimum levels, the chances are high that thin oil layer can not prevent metal to metal contact. This may increase the rate of wear and tear of engine components. So, at higher temperatures the engine oil must have sufficient viscosity to form a thick lubricating layer around the components.

To cater to these requirements we need an engine oil which neither become too viscous at low temperatures nor becomes too thin at high temperatures. This problem is solved by multi grade engine oils. These oils contain different additives which helps them in  maintaining optimum viscosity at all operating temperatures. These additives are polymeric compounds called viscosity modifiers.

The name of engine oil contain some alphabets and some digits. You might notice names as 10W-40 or 5W-50 etc. Here ‘W’ means that the oil can be used in winter also. Or either it is an all weather oil. The first digit represent the viscosity at low temperature ie. Around 0 degree Fahrenheit. Lower the number, thinner the oil at low temperatures.  The second digit represents viscosity at 100 degree Celsius. Higher the number, thicker the oil remains at high temperatures. For example the oil 10w40 remain more viscous than 5w30  at 100 degree Celsius.

These were some basic information regarding engine oil. Looking at the importance of engine oil we must always use the quality oil specified by the automobile companies. Always use the recommended grade of engine oil so as to improve the performance of your vehicle.All engines require some form of lubrication and this is provided by the engine oil. This oil is required to carry out numerous different tasks when the engine is in operation, the primary function is to lubricate all the components by reducing friction and preventing or reducing metal to metal contact. The oil stops two  surfaces from touching each other by forming a thin lubricating layer on mating